Following a dominant two-leg performance against Schalke 04 in the Champions League Round of 16, Manchester City have drawn domestic rivals Tottenham in the Quarter-Final.

This is City's third time reaching the Quarter-Final in the past four seasons, and their second time facing another Premier League club in the knockout phase over that span — they fell 5-1 on aggregate to Liverpool in last year's Quarter-Final.

With hope renewed and City firing on all cylinders heading into this clash with Tottenham, let's look at how the two sides got here and how they match up. 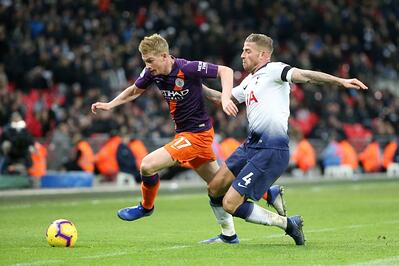 In the opening match of Group F, City fell at home to French side Lyon, 2-1. Pep Guardiola's squad got back on their feet immediately, though, winning the next three matches, scoring 11 goals in the process. The reverse fixture with Lyon resulted in a draw, but it was enough to secure City's spot in the Round of 16 with one group stage match remaining.

The Round of 16 draw matched City with Schalke 04. In the first leg, goals from Sergio Aguero, Leroy Sané and Raheem Sterling gave City a 3-2 victory on their German adversary's turf. The flood gates opened in the reverse fixture at the Etihad Stadium as Guardiola's side put seven past Schalke en route to a 7-0 victory.

The seven-goal triumph equaled the record for the biggest margin of victory in a Champions League knockout phase match.

Through eight games, Man City have scored a whopping 26 goals — a Champions League best. Part of that tally is thanks to City's trademark passing accuracy — they have completed 90% of their passes in Europe this season. While this has become the standard of a Guardiola-led team, City is passing the ball on par with their Premier League stats, even with the step up in competition that Europe brings.

A trip to the Quarter-Final is an accomplishment within itself for Tottenham after surviving the infamous "Group of Death".

Against all odds, Mauricio Pochettino's side made it out of Group B after hope was seemingly lost following consecutive defeats to Inter Milan and FC Barcelona to begin group play. But Spurs persevered, pulling eight points out the final four matches of Group B to finish second in the group and earn a place in the Round of 16.

The trek out of Group B was finalised after Lucas Moura netted an 85th-minute equalizer against Barcelona in the final matchday of the Group Stage. The draw put Spurs equal on points with Inter, but Tottenham went through thanks to a better head-to-head record.

Tottenham drew German giants Borussia Dortmund in the Round of 16, but the match-up wound up being more appetizing on paper than in motion. Spurs took the first leg, 3-0, after goals from Son Heung-Min, Jan Vertonghen and Fernando Llorente led them to victory in front of a home crowd at Wembley Stadium. A Harry Kane goal in front of the Yellow Wall at The Westfalenstadion pushed Spurs to a 4-0 aggregate lead and punched their ticket into the Quarter-Final.

Since the slip up to start their Champions League campaign, Spurs have steadied the ship and produced results more fitting for a Pochettino-led team. They're passing the ball more efficiently in Europe than in domestic play, and their defense has conceded one goal or less in the last five Champions League matches.

One of the most important stats to dive into before this meeting is Tottenham's possession stats against Barcelona in their second meeting. In the do-or-die match-up on the final day of the group stage, Spurs kept 52% possession against the side that made Guardiola's "tiki-taka" play-style famous. 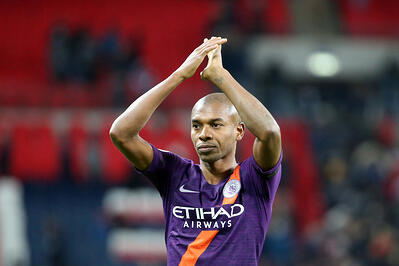 It may sound funny to say that something was missing from City's 7-0 victory over Schalke, but that is the reality that we're living in. After receiving a yellow card in the first leg of the Round of 16, midfielder Fernandinho was suspended for the second leg. Ilkay Gündogan slotted into Fernandinho's role and got the job done, but there is no guarantee that the replacement will suffice as City attempts to move through the European bracket.

While City proved that they can hold water without the Brazilian stalwart, he is still an intricate part of a full-strength Guardiola squad. The 33-year old has an ability to play deep in the defensive front while also controlling the pace and distributing the ball directly at the point of attack. His ability to accurately launch the ball down the field allows him to stay back without roaming too far up the pitch and getting caught on the counter attack.

Tottenham likes to play the ball overhead — especially in search of Harry Kane's noggin — so Fernandinho's lack of backtracking will make it more difficult for Spurs on the counter. Expect him to frustrate Christian Eriksen in Tottenham's attacking half and be a catalyst in City's midfield.

Manchester City defeated Tottenham, 1-0, in the two side's first Premier League meeting of the season back in October. Riyad Mahrez propelled City to victory with a 6th-minute strike in front of an enemy crowd.  City played the role of aggressor through the 90 minutes with 13 shots to Spurs' four. Outside of the offensive mentality that City brought to the pitch, the two sides looked evenly matched for most of the contest — a testament to Guardiola and Pochettino's tactical preparation. 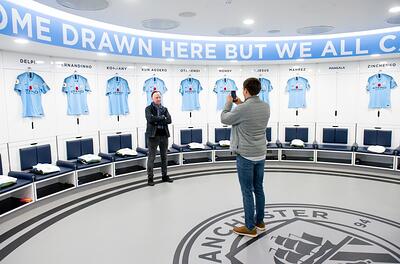 Wonderment is the best way to experience Manchester City's Quarter-Final match-up with Tottenham. Be at the Etihad Stadium with a Euro Anthem or Euro Champion Official Ticket Package to get a seat at the match, behind the scenes access to the club's facilities, hospitality accommodations and much more!

Get my Champions League Package